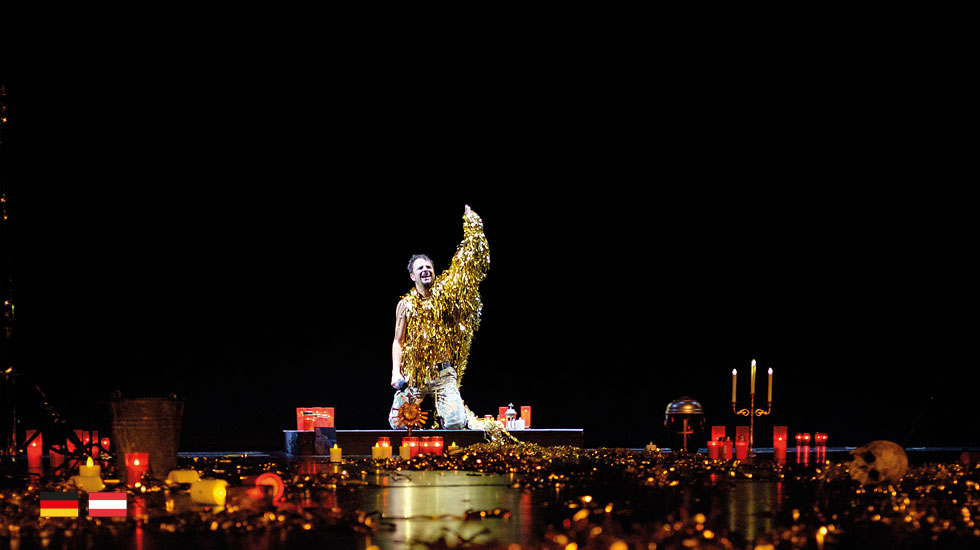 Based on HUGO VON HOFMANNSTHAL
Performed by PHILIPP HOCHMAIR

When Hugo von Hofmannsthal’s JEDERMANN was first performed in Berlin 105 years ago, the audience cheered and the critics shook their heads in disbelief. They condemned the work to literary and worldly insignificance. But the audience kept on cheering… Seldom has a play withstood such destructive criticism while at the same time attaining such popularity.

Hugo von Hofmannsthal’s EVERYMAN has been performed in Germany and Austria in different venues (the best known is the production in Salzburg). Some consider JEDERMANN an „old hat“. But it certainly is not the case with this production. The story remains the same: Death arrives at Everyman’s side to tell him it is time to die and face judgment. Upon hearing this, Everyman is distressed and begs for more time. Death gives him an hour to find a companion for his journey. In his “ECSTATIC JOURNEY TO THE AFTERLIFE“ (Kultur Lindau), Phillip Hochmair is Paramour, Mammon, Devil, Cousin, Death, and all other characters from JEDERMANN. Electro beats and rock sounds transform the old mystery play into a furious concert. Impersonating a rock star, Philipp Hochmair tells the story of the rich, contemporary Everyman. Accompanied by guitar riffs and experimental sounds, his Everyman wants money, love and intoxication. The music makes him ecstatic, traveling between life and death, singing – until he sinks into the tomb.