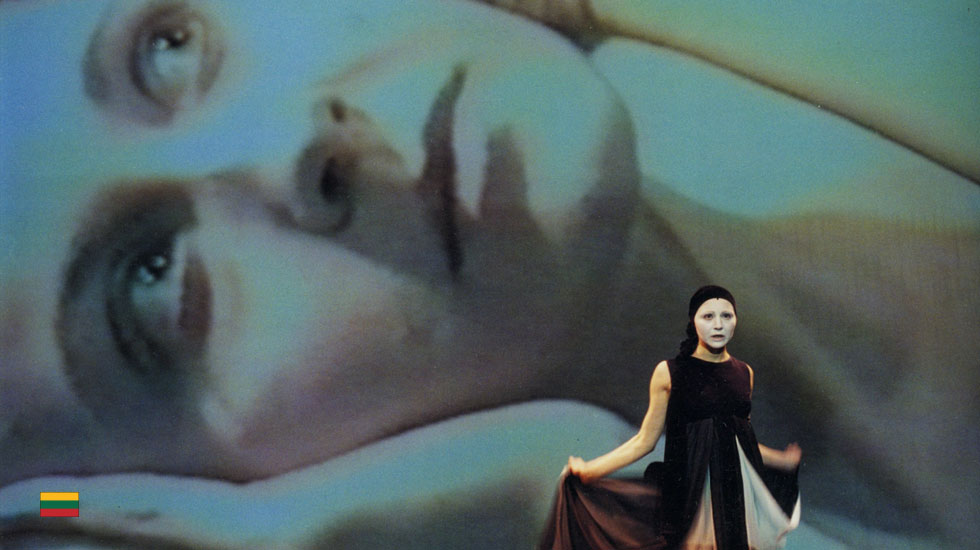 Besed on the Tragedy of SOPHOKLES
Performed by BIRUTE MAR

At the new King of Thebes, Creon‘s command, Antigone, the daughter of King Oedipus, is to be buried alive for trying to bury the body of her brother Polinyces. And all she did was scatter a handful of sand over her brother‘s dead body…

Inspired by the classical tragedy of Sophocles, ANTIGONE explores the ways to unite the ancient and the contemporary language by contrasting sequences of huge video images of chorus with human figures in front of them. Birute Mar is once Antigone, then her sister Ismene and also Creon, his son Haemon, the guard and the prophet Tiresias – she plays all the characters. Fragile human body on stage and big virtual projections of chorus are accompanied by music and text.

As Birute Mar put it: „I dreamt to make a step forwards with Sophocles ANTIGONE to break away from traditional theatre. I felt inspired by the musicality of the language and monologues – that „avalanche of words“ resembling folk laments, where it is not possible to grasp the meaning of words just by listening. I tried to find images that could speak the ancient and the contemporary language at the same time and wondered what could be the face of the contemporary chorus. Eventually, we decided to create the performance as a sequence of video images with huge figures of the chorus in the background in opposition to Sophocles‘ characters – small lively spots in the front. The contrast is similar to the one between Antigone‘s death penalty and her „crime“.

Birute Mar has had close ties to Thespis from the very beginning. She performed at 4 Thespis festivals – winning the main award twice. She was in Kiel with the first version of her ANTIGONE already in 2001.

Supported by the Lithuanian Embassy in Berlin.
* This show is not part of the competition.